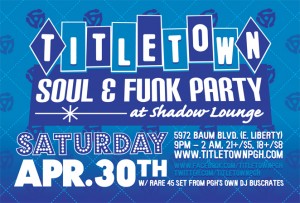 TITLE TOWN Soul & Funk Party returns to Shadow Lounge ONCE AGAIN on Saturday, April 30th. This is where you gather to lose your blues and show off your dancing shoes. Don’t wait too late … hurry up and get there early. Record after record 45s get stacked and as the night progresses the Lounge gets packed!

This month Title Town welcomes a maestro of contemporary modern funk and hip hop production, Orlando “Buscrates” Marshall aka the Sixteen Bit Ensemble. He will be in the house throwing down a not-so-common, all forty-five soul & funk set with us. If you’re unfamiliar, he is one of Pittsburgh’s own. Back in 2009 his debut vinyl release was issued on 7″ by the locally-based Harmony Society imprint. Late last year he collaborated with J. Malls on The Top Shelf Collectors mix CD. His most recent project is the debut vinyl release by his super producer group ELQ (East Liberty Quarters) on Rotating Souls Records. In addition to all of that he has an extensive digital-only catalog as well.

FYI – This is going to be an insane night all across the city. There are multiple annual events going on in addition to the regular monthly options, as well as the other random things that pop up. We still recommend that you arrive early to ensure admission, but the attendance may very well be a little bit lighter than normal. In which case there may not be as long of a line to wait in … YAY!

So put it on your calendars and make your mental notes. We’ll get the night started with the good slow stuff to put you in the mood and proceed to make you shake it from there. We spin the classics as well as the material that you won’t hear anywhere else in the city of Pittsburgh, or beyond. Buscrates is in the house, so prepare yourself for an above average dose of the eighties boogie funk. TITLE TOWN Soul & Funk Party at Shadow Lounge is where you need to be the last Saturday of the month!