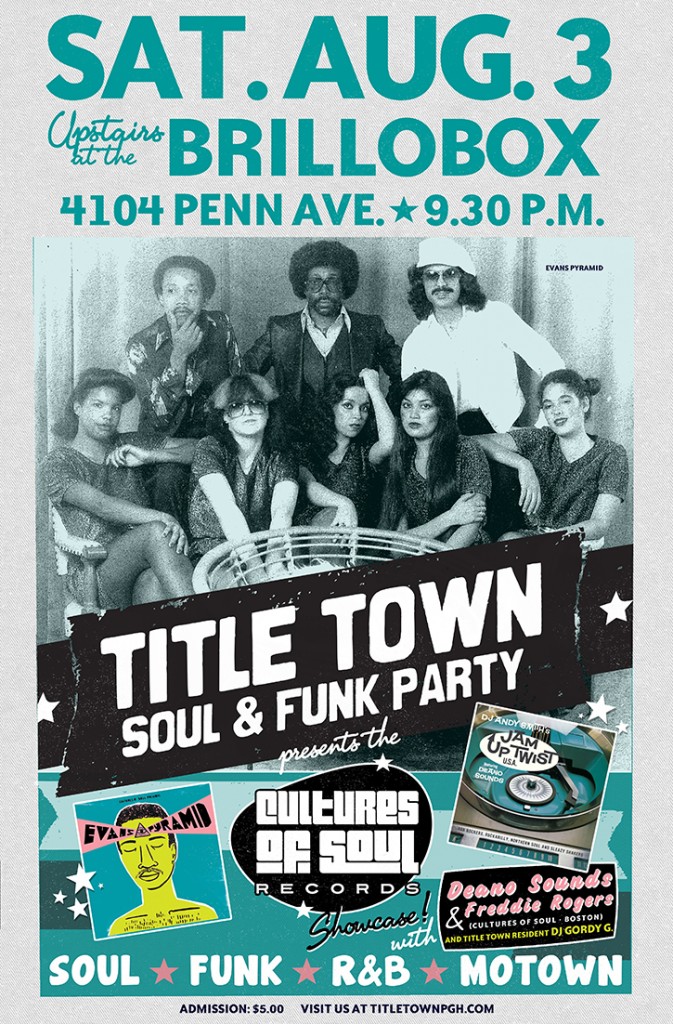 Now, get up out of your seat!

TITLE TOWN Soul & Funk Party is stoked to welcome guest DJ DEANO SOUNDS – vinyl junkie and the man behind CULTURES OF SOUL – one our favorite new labels releasing new and reissued soul, funk, jazz, latin, salsa, afrobeat, and more from BOSTON! Travelling with DJ partner FREDDIE ROGERS, the duo will join TITLE TOWN in spinning a non-stop, shake-worthy all 45 DJ set while you party down to best sounds of RARE and CLASSIC Soul, Deep FUNK, R&B Shakers, DISCO and BOOGIE from the Cultures of Soul catalog and the TITLE TOWN crates!

*Arrive early to get your hands on prizes and giveaways courtesy of Cultures of Soul Records!

“Deano Sounds has been DJing and collecting vintage records for over a decade now. In 2008 he started DJing for Viva Radio and created his Cultures of Soul Radio Show which features eclectic vintage music for the dancefloor from across the globe. Soon after he started his own record label, Cultures of Soul Records and has since been releasing rare but danceable vintage records from all over the world. Receiving high praise from DJs and collectors alike including DJ Andy Smith, Gilles Peterson, Andy Williams, DJ Prestige, Oliver Wang, Andy Beta, Dimitri from Paris, DJ Soul Sister, DJ Day, James Pants, Cosmo Baker, and Mr. Scruff. Deano is the executive producer and compiler of all Cultures of Soul releases including the highly acclaimed Evans Pyramid album, Stanton Davis’ Brighter Days, and the World’s Funkiest Covers compilation series.

On the DJing, Deano has been a recurring guest at Boston’s premier soul night, Soulelujah and has started many rare soul and R&B nights at various nightspots in the Boston area. Deano has also DJed in Brooklyn and London multiple times. Deano also been invited to guest DJ on radio shows as varied as Galactic Fractures, A Downtown Affair, and Solar Radio. And he has opened for Lee Fields and the Expressions, Barrence Whitfield, 9th Wonder, and DJ Kon.”

Coming this fall, Deano Sounds and DJ Andy Smith have teamed up together to release Andy Smith’s Jam Up Twist US Edition – a killer compilation of R&B Rockers, Rockabilly, Northern Soul, and Sleazy Shakers much like you would find at Andy’s world renowned Jam Up Twist club night in the UK.