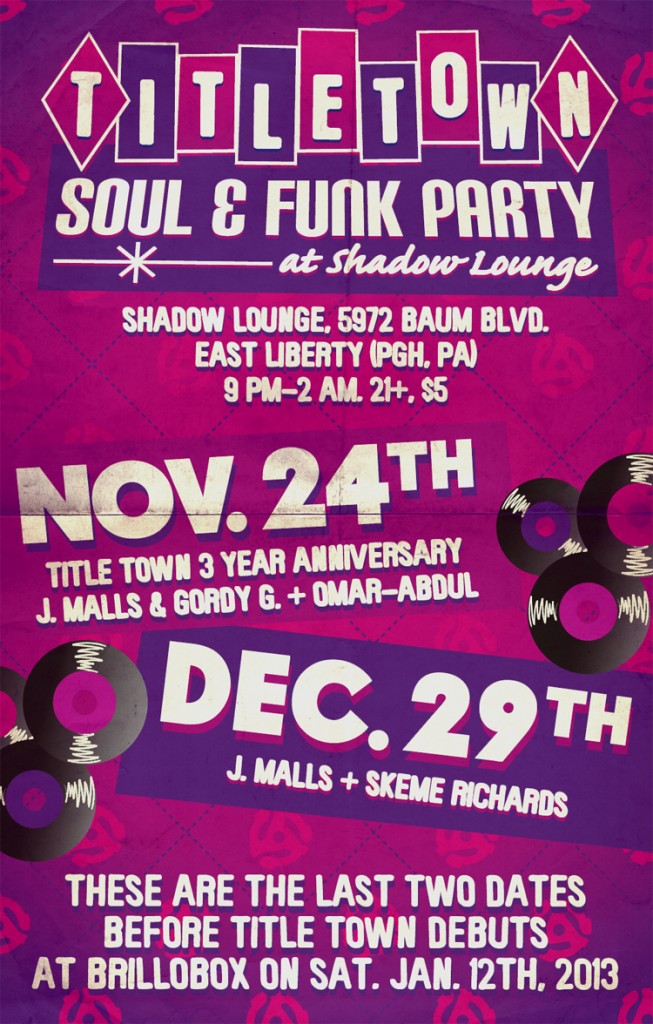 Like a record that never gets old, the longest running soul and funk night in Pittsburgh has been spinning the real stuff for real people since 2009 – and is still going strong.

It’s that one-of-a-kind party with DJ’s J.Malls and Gordy G. spinning classic and obscure 45s from the late ’50s through the early ’80s, including Northern Soul, Deep Funk, Modern Soul, Disco and Boogie.

This month, we spin the record full-circle as we enlist guest DJ Omar-Abdul to join us behind the decks. Not only has Omar-Abdul R. Lawrence been an active emcee, DJ and producer for over 10 years, he is credited, along with J.Malls, with co-hosting the The Big Throwback – the long-running soul and funk dance party at Pittsburgh’s Brillobox. He’s done numerous collaborations, worked for Rawkus, Def Jam and Warner Brothers and holds degrees in Africana Studies and music from the University of Pittsburgh. A true vinyl veteran, we hand over the stage to Omar-Abdul to lay down the funky cuts and funky good times like he always does. Don’t miss this one.

TITLE TOWN has also shared the stage and supported artists such as Renaldo Domino, J.C Brooks & The Uptown Sound, Charles Bradley and Sharon Jones & The Dap-Kings.

In 2013, we bid adieu to the Shadow Lounge after three great years of late night debauchery, guest DJs, live performances, dance contests and some of the best people in the Pittsburgh. On Saturday, January 12th, TITLE TOWN will move to the Brillobox on the 2nd Saturday of every month.