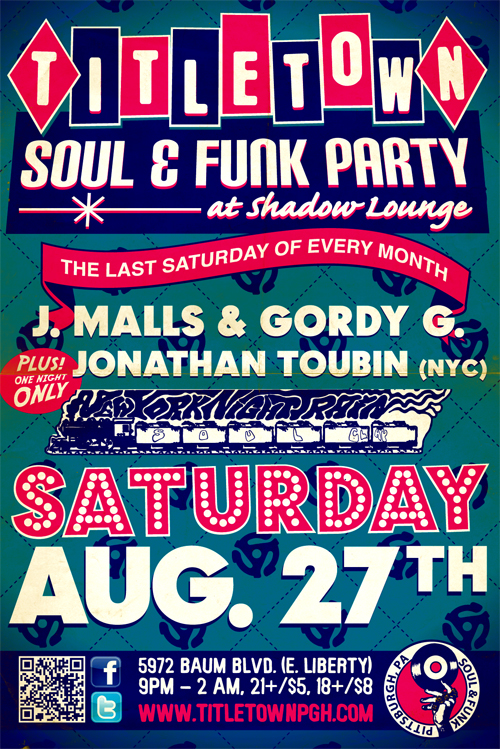 For two straight years JONATHAN TOUBIN’S Soul Clap and Dance-Off has been voted one of the most consistently bad ass, raddest, sweat-bathed dance parties in New York City and beyond.

On Saturday, August 27th, Title Town Soul & Funk Party welcomes NEW YORK NIGHT TRAIN’S JONATHAN TOUBIN to the Shadow Lounge to drop his R&B-heavy-wild party-style mix on your ever lovin’ ears for one our biggest events of the summer!

TOUBIN’s concept is simple – all night dancing to wild 45s of the finest soul, funk, R&B, garage, doo wop, rockabilly, British invasion, girl group, and dance craze recordings you’ve never heard – and of course – exclusively on 45RPM vinyl. Toubin’s parties not only sell beyond capacity in NYC, but he has soul traveled all the way from Portland, Oregon to Portland, Maine and internationally from Tel Aviv to Mexico City – including monthly residencies in New York, Chicago, LA, San Francisco, Oakland, and PDX.

One of the best-known DJs in the New York, Jonathan has been embarking on a new mission: teaching the underground to dance…and dance together, no less. Earlier in the summer, he launched Land Of 1,000 Dances, a multimedia effort that combined projections of retro dances with his deep collection and live dancers—including Contortions mastermind James Chance, Kid Congo Powers and Anna Copa Cabanna—to help people learn crazes of the past.

“What was sad about The Twist was that people danced together before that,” Toubin says. “These dances are the first ones people danced alone. But on the other hand, they are far less lonely than dances are today.”

The NY Press writes, “Toubin is trying to bring a sense of community back to nightlife, fighting against the alienation that’s seeped into cool culture. And if there’s anyone who can do it, it’s Toubin.”

We do this for long enough,” he says, “these dances are going to become part of the culture again. People will take them to different states and different countries and they will just keep going and going.”

This party will sell out. Early arrival is strongly recommended!