This is it. It’s time to celebrate a decade of soul music.

From the beginning, we didn’t know it would last this long. Despite ever-changing tastes and trends, TITLE TOWN has stayed relevant and has become one of Pittsburgh’s longest running and most successful events. Join us on Saturday, October 5th when we mark TEN YEARS of TITLE TOWN Soul & Funk Party and welcome Philadelphia’s DJ Skeme Richards to Spirit Hall to help us celebrate.

Even better – we’re now bringing in 2 heavy hitters to help us rock two FLOORS of soul and funk! Buscrates (16-bit Ensemble, ELQ) + Anthony Susan (For The Record, Get Down Gang) will keep yr head nodding in the Lodge all night.

In a world filled with misinformation and distractions – this music remains a constant. It helps us escape the real world, but also connects us – on the dance the floor – to one another. It heals us and takes us on a journey – from deep funk to disco, from Motown to Memphis, from Northern Soul to ‘50s R&B – for a few hours every month.

TITLE TOWN kicked off at the Shadow Lounge in East Liberty in October 2009 and has been holding it down for ten years at venues throughout the city. Up-tempo beats, funky grooves, and a blast of infectious energy from decades past, TITLE TOWN spins hand-picked rarities from regional scenes around the country – including music from right here in the Burgh. These anthems – cathartic classics to the rarest of the rare – will make you move.

THANK YOU to everyone who has supported us, danced with us, served (and spilled) drinks with us over the last ten years – let’s do it again.

Lexdray writes, “When you think of Philadelphia’s rich history of musical contributions, you automatically notice that it is also a city known for birthing some of the greatest internationally known DJ’s who are masters of their art. One such person who has deep roots and connections to the City of Brotherly Love is Skeme Richards.”

“Digging and spinning genres across the board from Hip Hop to House, Funk & Soul classics to Disco, Nu Disco and beyond, Skeme keeps things classy and continuously strives to separate himself from the pack. While maintaining originality, he keeps his first class status as a true party rocker all while satisfying the partygoer at the same time. His all 45 Funk & Soul party, Hot Peas & Butta is one of the most successful brands in the genre worldwide.”

TITLE TOWN is excited to welcome DJ Skeme Richards as our guest for our ten year anniversary.

Advance tickets are on sale now. Admission is guaranteed with an advance ticket until 11:30 PM. After 11:30 PM admission is dependent on venue capacity.
Doors open early at 9pm. Early arrival is recommended. 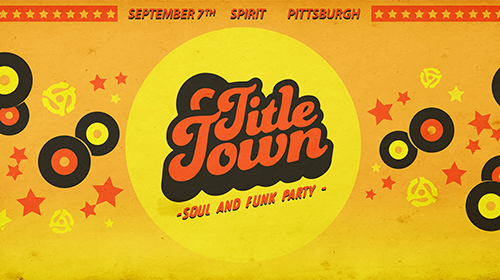 TITLE TOWN returns to the Spirit Lodge on Saturday, September 7th. Prepare for FIVE HOURS of the absolute best soul sounds EVER pressed to 45 rpm records!

Feel the groove as we cover everything from Northern Soul to Motown, Funk to Disco to Boogie … Latin Boogaloo and everything in between. TITLE TOWN is a fresh, feel-good party, inclusive to everyone, with one mission and that is to make your body move.

The Steel City’s #1 soul party takes you on a groove filled journey, while upholding the Burgh’s rich DJ legacy, with an appreciation for timeless tracks and seldom-heard sounds from decades past. It’s the Jackson Sisters meets Jackie Wilson, the Steel City to the Motor City, with a feel-good house party atmosphere all night long.

TITLE TOWN navigates genres and past eras, blending the best of labels such as Motown, Stax, and Chess with hand-picked rarities from regional soul and funk scenes around the country including right here in the Burgh.