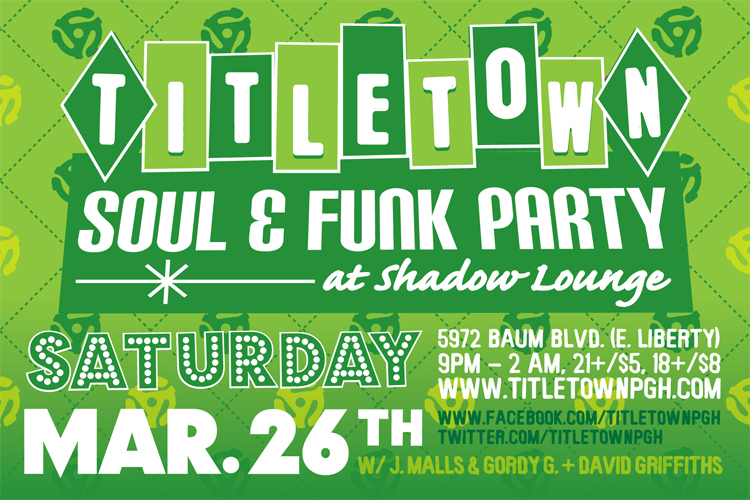 Title Town is that magical last Saturday of each month when J. Malls and Gordy G. play five hours worth of 45 rpm soul and funk records. This month they’re joined by returning guest DJ, David Griffiths (New York, NY). David was the 1st guest at the debut Title Town party (Oct. ’09). He has such a good time in Pittsburgh that he’s been back on multiple occasions just to hang out and drink Yuenglings, but this month he’s officially back in the building with his play box!

When David isn’t DJ’ing he’s updating his website, www.newyorksoulrecordings.com, where he documents independently released soul 45’s originating from New York state. Perhaps you’ve heard one of the many reissue projects on Kay-Dee Records that he’s been involved with, or the Bob & Gene album (2006 Daptone Records). If not, be sure to attend this month’s Title Town. The sounds that you hear will be devastating to your ears! They may even make you shake your ass!!

For those of you who refuse to quit Mardi Grasing, get down to the sounds of NOLA’s own Eddie Bo and Allen Toussaint! What better way to wrap up Women’s History Month than with serious sister funk from the likes of Betty Lavette, or the heavy, heavy sounds of Betty Brewton! If modern soul and boogie is your thing, records by G.C. Cameron, Lowrell, and Pittsburgh’s own Brass Monkey are what we’ll bring!

Come on and DANCE GIRL! It’s going to be a STONE THING! Doors open at 9 PM and the records keep spinning ’til 2 in the morning. Early arrival is recommended.