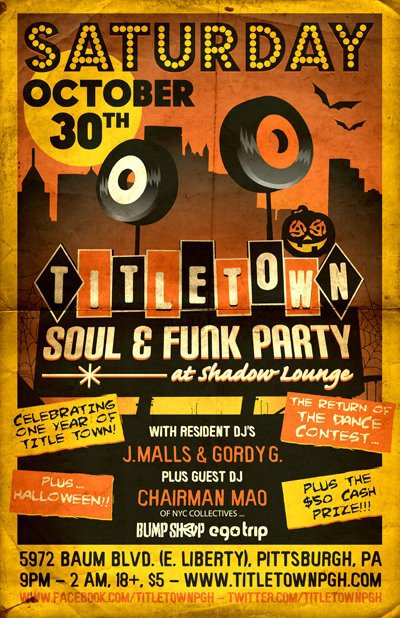 One year ago this month I, J. Malls (The Big Throw Back), & Gordy G. (Vipers Soul Club) joined forces and embarked on a soulful, funky new venture that we christened the Title Town Soul & Funk Party. It was an instant hit, setting attendance records for events at the 10 year old Shadow Lounge venue. This time around, on October 30th, we’re not only celebrating Title Town’s ONE YEAR ANNIVERSARY, but the Halloween season as well.

You may remember the dance contest that took place at the debut Title Town party. Well we’re bringing it back to commemorate the occasion! Get there early, so you don’t miss it. The winner will be awarded a $50 cash prize.

This month we’ll be joined by NYC’s “Chairman” Jefferson Mao. Jeff, as he is known in civilian life, is the founding resident of the Rotten Apple’s late, lamented Bumpshop funk & soul soiree, and the last of that party’s crew to come bless us with a 45 set. When he’s not writing for XXL, Wax Poetics, or some other nationally-distributed publication, or hosting his two monthly interwebz radio shows (‘Across 135th Street’ for www.redbullmusicacademy.com and ‘Spine Blowing Decisions’ for www.spinetv.net), he’s busy conspiring with his ego trip collective cohorts on such media takeover endeavors as ego trip’s Book of Rap Lists, ego trip’s Big Book of Racism!, ego trip’s The (White) Rapper Show & Miss Rap Supreme, and the oft-delayed but one-of-these-days-forthcoming egotripland.com. Ta-dow! |

Costumes are of course encouraged, but by no means mandatory. Just make sure you wear your dancing shoes!!!