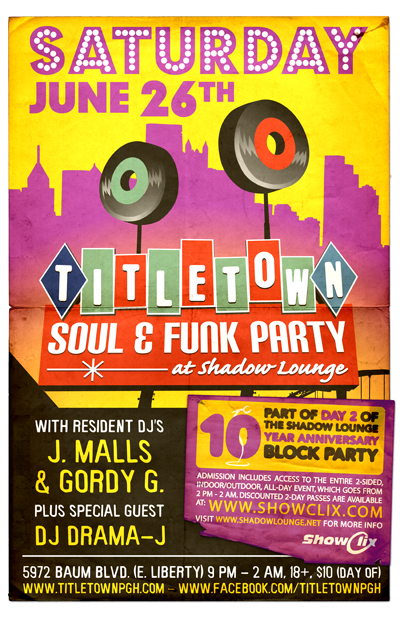 Celebrate 10 Years of the Shadow Lounge with Title Town

In 2000 the Shadow Lounge opened at the corner of Baum and South Highland – in East Liberty. Owners Justin Strong and Tim Guthrie created the lounge and performance space to foster an environment where people could come together over one thing – a mutual love of music and art.

Ten years later and still managed the same way – the Shadow Lounge – has been voted as one of the Burgh’s most culturally significant venues for entertainment and continues to make an impact on East Liberty and the Pittsburgh music scene.

TITLE TOWN is excited and honored to be part of DAY 2 of the Shadow Lounge 10 Year Anniversary Party. We’ll be doing our usual thing with 5 hours of the finest soul, funk and R&B music put on wax.

We’re also pleased to have Pittsburgh’s own DJ Drama-J join us this month. Drama-J is a DJ with deep roots in the world of beat digging, an avid record collector, beatmaker, drummer and founder of Pittsburgh based hip-hop trio Elevated Mindz.